A few weeks back Fireball comes into the railcar with an adventurous plan to go canoeing down the Elk River. Ok, maybe I am a pessimist but I never thought this trip would make it. I thought there wouldn’t be enough support to make it happen. Everyone is always busy. But I agreed to go canoeing. The trip did get bumped to another weekend. We also had to change canoe rental companies, and added another stop along the way. So when we all showed up at a little after 9:30 yesterday to depart, I was surprised.

We all gathered at camp. We all had packed snacks and refreshments, but didn’t have the needed cooler space. I used my mad OODA skills and planned a strike on the O’Club for another cooler. After a stop north of Huntsville for more ice, more refreshments, and the much needed koozies we headed to Lynchburg, TN. Snapper has a thing with koozies. I think she has a collection of 423 at her home. She and her battle buddy, Cornbread, selected a koozy to represent the personality of each member on the expedition, with mine reading: “I know it looks like I’m paying attention.”

The drive to Lynchburg was the longest ever. I was on point in the convoy and the expedition leader was in the second vehicle and the kayakers were in the tail. They were slow, really slow, extremely slow. I have driven up 431/231 a few times in my life [editor’s note, a few does not begin to account for how often the author has driven 431/231 to Lynchburg]. When the speed limit is 60 it is ok to go 60 miles per hour. It’s a fact that cops will not pull you over doing the speed limit, even when they are trying to take back the highways.

Arriving at the Jack Daniel’s visitor center we discovered we had eight veteran JD tour attendees and two newbies to the distillery. I was gleaming with joy and excitement about being at Jack with a group of friends. It was equally exciting as a kindergartner going to Chucky Cheese with his or her car pool friends. I gave the newbies the prerequisite information needed for the tour. We were in tour number six with Bruce. Oh so close to the coveted number seven tour.

We followed Bruce from the Rickyard, to the cave spring, past the statue of Jack and into the old office. Here is where we discovered why the distillery’s flags were at half staff. In the side room sat a barrel with a white carnation and a photo of Jimmy Bedford on it. Jimmy Bedford was only the sixth Master Distiller of the whiskey that has flown from the hollow since 1866. I had only met Mr. Bedford once in my life, but knowing the closeness of the community, I felt so sad almost as if I had lost a friend of mine. In a small community like Lynchburg everyone knows everyone and everyone will morn the lost of Mr. Bedford. 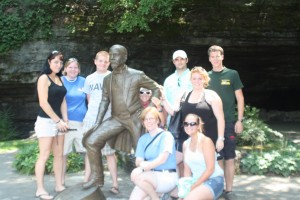 After the tour the group made a visit to the Squire’s room. In standard form we were not all together; we had stragglers and late comers. A group of slow pokes seemed to be our identity. The Squire’s room is a hide away which has a treasure trove of trinkets and memorabilia to Jack Daniel, his whiskey, and the Squires. Everyone in the group looked at the room, at the art work, and at the photos that filled the small side room. We talked to our host about the loss of Mr. Bedford and the upcoming Jack Daniel’s World Championship Invitational Barbeque Festival. We could have stayed a little while longer, but if we were going to get on the river, we had to get moving.

After a longer than planned visit to the square and a visit to the slowest Subway on the face of the earth we made our way to Kelso, TN. Kelso is home to Prichard’s Distillery (Sweet Lucy), two canoe rental companies and a fair amount of red necks. Our rental company was across the road from Prichard’s. It looked more like a junk yard than an outdoor adventure company with canoes to rent for an expedition down the mighty Elk River! I could hear banjos playing in the back ground, and when a man asked if we knew anyone in Huntsville who wanted to get into cosmetology I saw this day going badly.

We made our way down a pitiful excuse of a road to a soybean field next to the river. We unloaded the coolers and canoes and prepared for our great adventure. We launched from a muddy swimming area where horses and campers were frolicking around. People from the bank shouted good luck and best wishes as we left the congested area. Not even 50 feet from our launch site, we broke into the coolers for snacks and refreshments. A few more feet down the river I heard Fireball exclaim canoeing was difficult. I then discovered Fireball and Mr. Fireball were canoeing down the river backwards in their canoe. Yes, there is a front and back to a canoe. Thank you CRS for teaching me how to canoe!

We had four canoes and two kayaks. Snapper and Cornbread were in the widest canoe since it was the most stable. Snapper is not a fan of water snakes. Ok, she is not a fan of snakes of any kind, color, or geographic region. She, just like Indiana Jones, hates snakes. Plow and Oz were in another canoe with one of the coolers. That left Chris and I in the final canoe. Our kayaking friends were Ratchet and Mutt. As we floated down the river we tried staying together, but remember we had some slow pokes in the group.

Fireball and Mr. Fireball had to switch positions so that the canoe wasn’t going down the river backwards. Snapper and Cornbread’s mission was to say near the middle of the river to avoid any encounters with snakes. Plow was avoiding any encounters with the paddle and the water. Oz was his battle buddy and she did do most of all the work while he laid back. The kayakers were very happy paddling down the river, so happy that when Fireball and Mr. Fireball’s canoe broke they switched out with them.

As the day continued on and Fireball had more refreshments she grew more comical. As she paddled the little kayak you could hear her laugh from far behind us and far in front of us. Our group was passed by two groups much larger than us and a family with a pit bull in their canoe. We were not paddling at a consistent speed or with speed at all. We stopped for pictures, to goof off, for drinks, and for snacks. But we never stopped for snakes.

At the highway 64 bridge Fireball took a spill in her kayak. She flipped right over. Chris and I turned around to help her right as she popped out of the water giggling. All was well with her and I was looking for a bit of a challenge. So I convinced Chris to go back up stream and try another way through the brush and rocks. Our communication is not the best and I took a spill in the river as well. I lost my glasses and bruised my ribs and rear end. But I was able to save my faithful companion and life long friend. My Dixon Ticonderoga was saved. I swam down the river for a little bit and then climbed back into the canoe.

We finally made it to the end of our river adventure and the sketchy red necks came to pick us up. But the day was still not over. We stopped at the slowest Mexican restaurant in the history quesadillas. Hind sight is 20/20, but I didn’t have any glasses. We should have eaten at Pizza Hut, because we didn’t get out of La Mexican Restaurant in Fayetteville until nine o’clock. But at the end of it all we all had a great time.

The purpose of the day was to get away from the normal work and have fun with friends. Well, maybe for Snapper it was simply not to run into a snake. We got to visit Jack Daniels, make some memories, and canoe down the Elk River. It was one of those perfect days, a day that you will remember until you are really old and wrinkly. I’m not able to tell all the great stories of the river like Mr. Fireball breaking the rope swing or peeing in the river. Some things are better left told in person. The whole day and all the memories I will cherish! Thanks gang and thanks Fireball for leading our expedition!