My day started off with a tour of Mammoth Cave. Did you know that Mammoth cave has over 367 miles to venture through, making it the world’s longest known cave system? I would hike three miles of the total with 37 other guests of the national park. The majority of those guests were middle school students. I had driven all the way to Kentucky to be with Victory Christian Academy on their field trip! No worries, I did try selling them a Pathfinder trip to Space Camp. 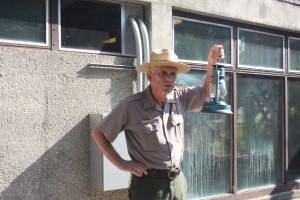 My tour was different than most. I went on the Violet City Lantern Tour. I was so excited about going into a cave I brought three flashlights with me on the trip. I wouldn’t need even one of them. We were given an old oil lamp to guide our way through the labyrinth of trails. It was dark and a little scary, but our tour guide, Ranger Joe (that is him in the picture), did a marvelous job teaching us about the role the cave played in fighting off the British in the War of 1812. But that wasn’t the first time it was in habited. More than two thousand years ago Native American’s lived near the surface river and took shelter in the cave at times.

Once my tour guide learned that I worked at Space Camp we shared stories of school groups and presentation styles. I told Ranger Joe about my role at camp training the staff. He wanted feedback from me at the end of the tour. The more I told him stories, the more he told me stories. I stuck to the front of the group with Ranger Joe. That way I could also see where I was going in the dark cave. I really got excited when Ranger Joe told the group about Ronald Reagan’s visit to the cave. Reagan had wanted to visit Mammoth as a youth. So as president he called the park’s superintendent to arrange the visit. Could you imagine taking the president on a tour? 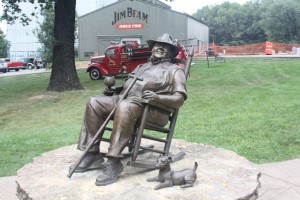 My next adventure was up to Jim Beam to tour the distillery. Jim Beam touts itself as best selling bourbon in the world. It may sell a lot of bottles, but I was not happy with my visit to Clermont. Unfortunately, the entire Jim Beam facility is under a multi-million dollar renovation. They want it to be the best stop on the Bourbon Trail. I did get to join a tasting. The tasting at Jack Daniels was so much nicer than Jim Beam. Until Jim Beam is finished with their remodeling, I would suggest stopping somewhere else along the trail.

I wasn’t planning on stopping at the Heaven Hill Distillery. However, since I didn’t spend much time at Jim, I made the stop. Heaven Hill produces Evan Williams and Elijah Craig. If you are not familiar with those names, they were early distillers in Kentucky. Elijah Craig and Dan Call had a few things in common, making spirits and preaching. Craig is credited with being the first to age his spirits in charred oak barrels. I learned today he stumbled across the method after his barn burned and he was too cheap to buy new barrels. 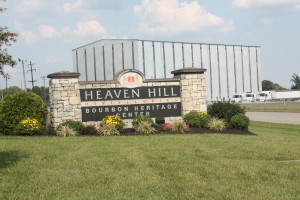 I did learn a lot about bourbon at Heaven Hill, but I was not impressed with what I saw. The only thing I toured was a rick house. I think in Tennessee they are called barrel houses. There isn’t a still on the property. In 1996 there was a massive fire started by lightning and strong winds helped to burn down several buildings. Fourteen percent of its inventory was lost in the fire. The company survived with help from Brown Forman and Jim Beam until Heaven Hill could purchase a new production plant. Currently, the bourbon is made in Louisville then aged and bottled in Bardstown. It works for them, but didn’t make for a good tour. I did learn a lot!

I am tired today. I am a little grumpy that I drove to Clermont just to look at the outside of buildings. But that is part of the adventure! Keep moving forward, don’t complain when you are stuck in traffic, and never pass up a clean rest stop. Those are the rules of the road. I am looking forward to tomorrow. My goal is to visit Maker’s Mark and Woodford Reserve. On a trip to visit Chris’ parents I saw the sign for Woodford and wanted to visit. It was the first distiller I wanted to tour here in the States. Tomorrow, I may get my chance!!!

1 Response to Joe and Jim