Dogs are the greatest of all pets and I can’t remember a time when I didn’t have a pup to call mine own. Well, that is not completely true. My parent’s first Doberman Pincher was a few years older than me. Bull was a black and tan male who rode in the back of my dad’s truck. All dogs since then in my family have been compared to Bull. My current hound dog may not surpass his majesty Bull’s greatness, but he is in the same league.

See, Bull is legendary in my home town. There are thousands of stories, like the one where he got his name. My mom and dad visited my grandfather’s gin when Bull was just a pup. My dad was very proud of his Doberman Pincher and explained to Ga-Ga his German heritage. In classic S.K. fashion he proclaims, “That’s Bull Sh*#, that dog is a black and tan coon dog.”

Bull survived being run through a silage cutter and heart worm surgery. People discouraged my parents from owning a dobby because of its aggressive nature. They learned quickly that Bull was a gentle giant when Walter, my older brother, teethed on Bull’s ears. I shared an ice cream cone with him once or twice. He went on many trips with my father and minded better than I did as a child.

Bull was our first true family dog. He slept inside, hung out at meals, licked my father’s toes while he was asleep in his lazy boy, and enjoyed a special place in our hearts. The first dog that would rival, but not surpass Bull’s greatness was Scarlett. She was a blue and tan Doberman Pincher. The first two weeks of her tenure at Oliver Farms was most definitely rocky. She came from a show dog family. She had been pampered from birth. So much pampering that she never stepped foot on grass until her first night in Carroll County. Watching her attempt to go to the bathroom on grass for the first time was an unusual sight.

Scarlett was four months old when we got her. She was named for Scarlett O’Hara from Gone with the Wind. She was prissy, but very smart. She had several toys and a small box to keep them. She would play with a toy and then place it back into the box. Yes, she had mastered a feat that my mom had tried to teach me for ten years. She would carry shoes, but never chewed on them. My mom would get angry at her each morning, but eventually how could you get mad at Scarlett. She was our best friend.

We had lots of dogs that were good, but just not great. To name just a few we had, Bismark, Rose Bud, Junior, Maggie, Hazel, Dottie, Argyle, Otto, Lucy, Tallulah and Zelma. Dottie was my Dalmatian, Argyle was our first blue Doberman, and Lucy was a brain damaged fawn dobby we referred to as Lucy Retardo. She was so precious. Maggie was a German Shepherd I got when I was in kindergarten. She was a great friend and mother to her pups. Maggie once replaced a lost pup from her litter with a baby opossum. I am sure the mom opossum was pissed, but Maggie wanted a full littler.

She even noticed when we lost a member of my family’s pack. After Will passed away she met us at the car, looking and counting the family members. There was one missing and she continued to look for him until her last day on the hill. Dogs are such emotional creatures. They know what your feel and they can empathize with. When you need a shoulder to cry on you can turn to you hound dog. 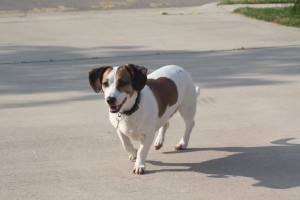 Currently, I have a Dachshund/Jack Russell mix… a mutt, but we call him a Jackshund. Boo came to us with a past. He is a hot dog, a rescue dog with a twist. He lived in an undisclosed neighborhood in Huntsville. His previous owners didn’t really want nor need a dog. He was found roaming the streets looking for food or someone to love him. He was dirty and had a colony of fleas living on him. One day a neighbor found him without a collar, starving, dirty, and covered in ticks. He was taken to a rescue shelter where we would meet him days later.

Boo thinks he is the center of the universe. Early in the morning he will stand on my chest looking at me… it is almost like he is saying, “wake up silly, it is time to feed me.” He loves to be covered up with blankets. He will hop on the couch then turn and look… “hey you, come over here and put the blanket on me.” If Chris shows me extra attention Boo wants extra attention. He gets right in the middle of everything. He hates when we leave. He pouts and complains. He loves to sit on top of the easy-chair or walk across the back of the couches; I think he somehow channels a cat.

I have loved all my four legged friends. Dogs have been compared to members of the family. I will not go that far, but they definitely have an important role in my life. My mom and dad tell stories about having me in the car seat while at the dog kennel. So from a very young age I have been fascinated with hounds. One day I will have a pack of dogs just like on the movie Secondhand Lions. I want a Bloodhound named Barbeque, a chocolate lab named Hershey, a dog named Jack, and one named Booster. Simply put I love dogs. If you are a dog person and don’t have a dog, go out and adopt one today!

This entry was posted in Etc. and tagged Dogs, Family, Pets. Bookmark the permalink.