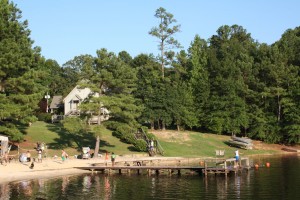 The Mega Reunion is winding down. We have already raided the kitchen, and there is still activity in the lodge. Groups of staff from one generation or the other have congregated for the last time before they say good bye. It is similar to the last day or the last week of camp. Everyone chats and visits more often or reflects sentimentally after every activity, meal time, and flag rising.

The trip down memory lane is somewhat surreal. While looking back at my camp maturation this weekend, which started with so many of the people at CRS, has made me realize how much the world and I have changed. So funny, I have worked at a half dozen or so camps. Present this weekend are multiple people I have worked with at multiple camps. It is so amazing to see all the grown-ups with their children years later. Now so many people I have worked with work at other camps all around the U.S.

I have forgotten as much or more than I remembered. I was reminded of the car alarm, the waterslide, camp-outs with camp stew, and Pow Wow breakfasts. I visited with April Gunn Duvall and her little one. I got to see the greatest of all Chiefs, Mrs. Newman. Jennifer D. Davis was here, Brandi Lewis came all the way from Dallas, and lots of digital age staffers. The cabins look the same but they resembled the AC Bubble not the immaculately clean campus in my childhood memories. Seeing the slide show brought forth a flood of memories.

Looking back on my first summer I was so overwhelmed at the responsibility of camp. I grew and became more daring and stupid all at the same time. I was reminded of the frog bucket, raiding camp store, and sneaking into the Scout Unit on Unit Night. Wow, I was dumb! I remember driving around camp in my red Sunbird. Oh, all the trips to Starkville or running to Ware (Where?) to the grocery store. And how could I forget all the pukie kids.

Now the youngsters are in the lobby talking and the old people are sitting in a circle in the dinning hall. April has her little one bundled up next to her, Carrie and the Morgan’s have put theirs down for the night. I have called Sarah Annie for the millionth time and she has seen fit not to kill me yet. Brandi is hanging with us too. We hear chatter and laughter from the lobby, but our conversation is focused on baby names and pet stories. Chris and I can hold our own with the pet stories. He will tell rabbit stories anytime, anywhere, and to anybody.

There is a great difference between the digital generation and my generation. I am jealous by the amount of food they can devour. I can remember during my first years at camp eating two hamburgers, bag of chips, can of soda, and two cow patty cookies. Tonight I was doing good to nibble on my chicken, drink a diet coke, and down a cookie. I have my priorities and eating a cookie is one of them. Oh, I hear the guitar. There are some songs that are new. Some have been forgotten and some have been altered. Susie is now interchangeable with RJ. Who is RJ and why is he picking up papaws and putting them in Susie’s basket?

The constant across the generations is the focus on Jesus and serving others. They are good people. They all have a servant heart event though at times I wanted to go Red Bull on them. I think Chief Carrie said it the best: “Camp of the Rising Son is a special place in our heart. Probably what is the most special to me about CRS is how a diverse group of people is united each summer and across decades for the purpose of sharing the love of Christ with children.”

That absolutely sums up the weekend perfectly. All Chiefs have a common summer or two or three working together for kids and Christ. They leave on different paths but for a few days in July we have been reunited to share our memories but mostly what we have been doing since our summers around Lake Anne. There is still the common thread and that is the love of sharing Christ with children, but now that includes the staff’s own children.

This entry was posted in Camp and tagged Camp, Camp of the Rising Son, Mississippi. Bookmark the permalink.