Ode to the Raptor

Oh, how I love thee, let me count the ways… The Raptor is our camp van. It is a 1997 Ford Aerostar mini-van. It was originally Aviation Challenge California’s van before making the trek to Huntsville, Alabama. There are many wonderful stories about the Raptor. I am sure many campers and staff have their favorite one. There have been countless trips to sick bay made by the Raptor. There is even the occasional off road adventure after a heavy rain. Some of my favorite memories include nugget counselors running out of gas in front of the Marriott. No matter what, the Raptor is apart of Aviation Challenge. 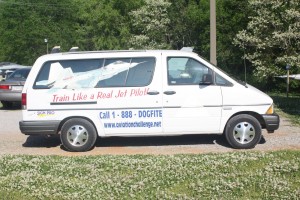 It is currently parked in lot behind the O’Club with 136,565 miles on the odometer. The paint has faded and the decals are coming off. There is a leak in the seal of the windshield. This condition has created the perfect environment for moss to grow on the upholstery liner of the van. Yes, green growing moss. The Raptor smells of mud, mildew, and smelly kids. There is a faded VF-101 Grim Reaper sticker on the back glass. And along the side is the old web address and toll free phone number for AC California. Do we care about the Raptor’s looks? Of course not, we love her just the way she is.

Cornbread has an odd fascination with the van. Once on a late night med run she threw a kid out of the van and forced him to walk back to Hab3 for calling the van “Craptor”. This is an exaggeration of course, but she did get angry at the young man. There have been many nick names for the beast. She got Raptor because of the F-22 decal on the side. Cornbread loves the van so much that many nights she takes the keys home with her. One day during Be Ready Camp, I had to visit her at Morris Elementary to retrieve the key.

There is a combination to its sliding door. You can’t slam the door shut or you will never get the door open again. To open you must have the passenger door slammed twice before pulling the door handle. Last summer when there wasn’t an inside handle we had to open through the sliding window. This van is special!!! There has been many kids get stuck in the back because the door jammed. It does have special features. Like the radio controls for back seat passengers. This comes in handy freaking out newbie drivers. They think the radio is possessed by demons. Which really wouldn’t surprise anyone, but it is just the smarty counselors goofin’ off.

My favorite Raptor memory is not just one. We have a tradition at the lake. If everyone is on time on Friday mornings and we get everything set up for graduation. The support staff and I will load up in the Raptor and go to Burger King for breakfast. It doesn’t matter how many of us there are, we all go. Never leave a man behind!!! This tradition was started when Snowflake and Forecast went to Denny’s before graduation. They didn’t come back! Since then I won’t allow staff to leave site on Friday mornings unless I am with them.

There really are so many great stories about the Raptor. Next week it will spend some time getting a tune up. Not to worry, I am sure the moss will still be there this summer. There will be many trips to sick bay yet to come for the old van. There is not a summer that goes by we don’t have a vomiting kid, tics to be removed, or an afternoon dose of Adderall XR. I just hope the Raptor is nominated for the Space Camp Hall of Fame next year.

This entry was posted in Camp and tagged Aviation Challenge, Raptor, Space Camp. Bookmark the permalink.