Most people know I love animals. I one day want a pack of dogs similar to the one on Secondhand Lions. I have always wanted a Bloodhound named Barbecue, a chocolate Lab named Cadbury, a few mutts named Larry, Daryl, and Daryl, and a pig named Nancy. Well this week I am fortunate to have my wish. I am house/pet setting for two dogs and a cat. Add to the pack me and my dog, Boo.

First you must understand I am the house guest to an eighty-five pound Doberman Pincher, a lamp shade wearing Schnauzer mix, and a curious black cat. They live a normal life without me in it. So when their owners had to leave suddenly because of a family emergency I looked like Viola Swamp to them. Then add my spoiled Jack Russell mix and you have the pilot for a sitcom in the making.

Last night it all started with the cat who wanted to snuggle with me. I would like to think I am an Olympic quality snuggler, but since they haven’t made it a medal sport, I prefer to only snuggle with the husband and occasionally, Boo. It was so comical, Salem, the cat, curled up on my belly and I had to hop up for something. She never found the right spot after that. She would try my leg, my arm, my foot, and even my butt. Nothing seemed to work for her. But the United States Air Force could learn something from her stealthiness. The only way I knew she was approaching was the crackle of her wicker kitty chateau. For a cat, she snuggles well!

Then there is the big dog! There is always a big dog! She is a descendant of one of my family’s pups. She has the biggest blue eyes and is smarter than most humans, especial those working at Wal-Mart. She wanted to bond with me… all night long. Mostly, I think she wanted to just be close to me, but I was sleeping on the couch in my L.L. Bean sleeping bag. I like to think of this house sitting thing as a giant sleep over with dogs. We pop popcorn, do each others hair, watch DVDs, and camp out in the den. All throughout the night she would visit me, lick me or just nudge me to say hi. She is just like her grandfather, Jealous, she likes the attention.

Don’t forget about Story. He is so cute, but not stealthy. Last night I would hear the rattle of his lampshade coming to visit it me periodically. But he took the proactive way to my heart, curled up on the chair next to me to sleep the night. Story is such a ladies man.
His name fits him perfectly. 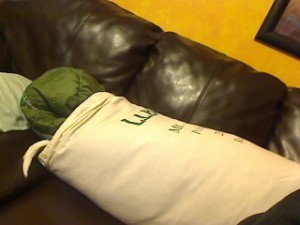 Now my addition to the pack is Boo. Do you know what he has done? He crawled into my sleeping bag which is inside its storage bag. So all I can see of him is his little white tail. He is such an anti-social dog. I took him to visit Divot and his roommates tonight. I had to leave, because he hates men. So what does he do? He finds a cave (bag) to crawl into.

It is like a giant camp out. But rather than my Girl Scout Troop camping with me it is my new pack of critters. We need like a name, Pack #7 or something. It is fun! All is well! I hope the K-9s are happy with me as their house guest. Most of all, I wish their owners the best. Know that we are fine here at Camp Sandy Hollow and wish we could do more to comfort.

This entry was posted in Etc. and tagged Boo, Pets. Bookmark the permalink.